Since the Seventies, Miramare Marine Protected Area – managed by WWF Italy under delegation of the Italian Ministry of the Environment – has been part of the Man and the Biosphere Programme (MaB), an intergovernmental programme established in 1971 during the 16th UNESCO General Conference. The MaB programme was established in order to provide a scientific basis to actions aimed at the conservation and sustainable use of biosphere resources, while encouraging global management schemes with a balanced man/environment relationship. 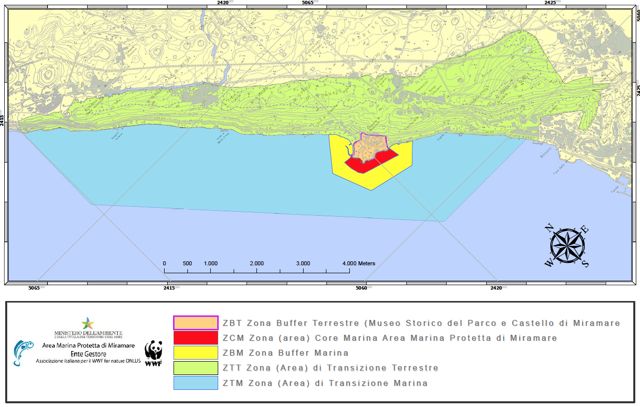 The MaB Programme’s current objectives are (i) to identify and assess biosphere changes caused by human actions and natural events, and their effects on man and the environment, with special attention for climate change issues; (ii) to study and compare the dynamic relationships between natural ecosystems and socio-economic processes, with special attention for biological and cultural diversity loss and serious threats to ecosystems; (iii) to ensure an eco-compatible development and a fit living environment within a global scenario characterised by rapid urbanization and overexploitation of energy resources (considered as one of the main causes of climate change); (iv) to promote knowledge exchange and dissemination on environmental challenges and solutions, as well as education in the fields of environmental management and sustainable development.

In recent years, all Italian MaB Reserves were asked to carry out a periodic review to assess coherence with the programme’s objectives. The MaB Reserve of Miramare was asked to revise the borders of the buffer and transition zones, as their extension (30-120 hectares) was too small to accomplish the general objectives of 2008 Madrid Action Plan. This led to a new zonation with the inclusion of a terrestrial and marine portion of the Coast of Trieste (about 2000 hectares), thus significantly extending the transition zones.

The name of the reserve has changed accordingly, so now it is called MaB Reserve of Marine Protected Area of Miramare and Coast of Trieste.

The zonation of the new MaB Reserve, approved by the Italian MaB Committee and the International Coordinating Council of the UNESCO MaB Programme, includes the following zones:

– Marine Core Area, matching the borders of Miramare Marine Protected Area (MPA) (DM 12-11-1986) and managed by WWF Italy on behalf of the Italian Ministry of the Environment (30 hectares);

– Marine Buffer Zone, surrounding the core area and regulated by an Ordinance of the Harbour Office of Trieste (90 hectares);

– Terrestrial Buffer Zone, matching the borders of the State-owned Park of Miramare, regulated and managed by the Superintendence for the Historical, Artistic and Ethno-anthropological Patrimony of Friuli Venezia Giulia, local detachment of the Italian Ministry for the Cultural Patrimony (35 hectares);

– Marine Transition area, matching the borders of the Fishing Restricted Area (FRA) of the Gulf of Trieste established by the Italian Ministry of Agricultural, Food and Forestry Policies (1464 hectares).

From Sea to Karst

The MaB Reserve includes one core and two buffer zones, matching the borders of Miramare Marine Protected Area and the State-owned Park of Miramare, surrounded by two wide marine and coastal-karstic transition areas. This ample zonation allows the enhancement of environmental, cultural, educational and scientific values of the Coast of Trieste under the aegis of UNESCO.

During the approval process, UNESCO has given great importance to the marine and terrestrial transition areas. In the terrestrial transition area there are still well-preserved environmental, cultural and land-use features that are typical of the karstic landscape (“pastini” terraces, vineyard and olive tree farming, pinewood and coppice wood, residual dry grasslands, old crafts, site-specific research activities, etc.), whereas the marine transition area is of great value from both a conservation and a sustainable exploitation point of view (traditional fisheries, seafood farming, environmental tourism, natural protection, scientific activities, navigation, etc.).

Something worth stressing is that the implementation of a local MaB programme does not affect any existing urban planning tools nor it introduces new regulations. In fact, the programme is aimed at the sustainable development of local territories by promoting eco-compatible economic, social and environmental activities carried out by institutional bodies and local stakeholders. Special attention is given to local cultural, agricultural, artisanal, commercial, fisheries and tourism activities, and companies are encouraged to use the MaB Reserve brand, as it is widely known at both the national and the global level.